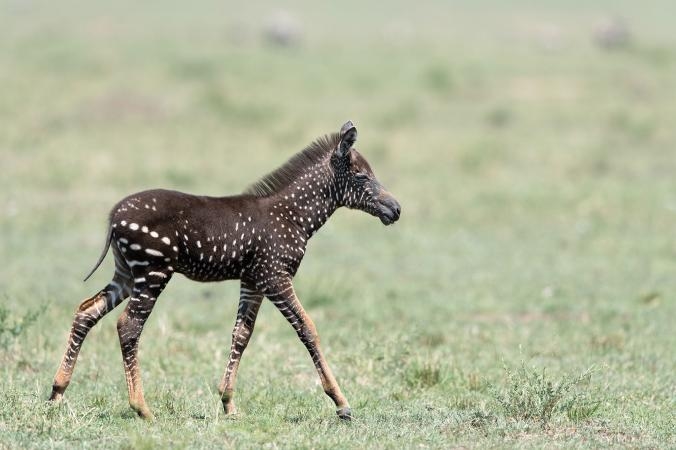 Talk about a horse of another color—a zebra foal with a dark coat and white polka dots has been spotted in Kenya’s Masai Mara National Reserve.
Zebra stripes are as unique as fingerprints, but Tira’s odd coloration could be the first recorded observation in the Masai Mara, according to Liu. Similar foals have been seen in Botswana’s Okavango Delta.

Tira and these other foals have a condition called pseudomelanism, a rare genetic mutation in which animals display some sort of abnormality in their stripe pattern, says Ren Larison, a biologist studying the evolution of zebra stripes at the University of California, Los Angeles. (See pictures of zebras in National Geographic.)

Zebras also experience other unusual color variations, such as partial albinism, which was seen in an extremely rare "blond" zebra photographed earlier this year in Tanzania’s Serengeti National Park.
Keeping track of such equine aberrations is useful to science as part of a broader goal to monitor changes in species and how they’re managed by local communities.

“There are a variety of mutations that can disturb the process of melanin synthesis, and in all of those disorders, the melanocytes are believed to be normally distributed, but the melanin they make is abnormal,” Greg Barsh, a geneticist at the HudsonAlpha Institute for Biotechnology, says by email. (Learn more about why animals are black and white.) 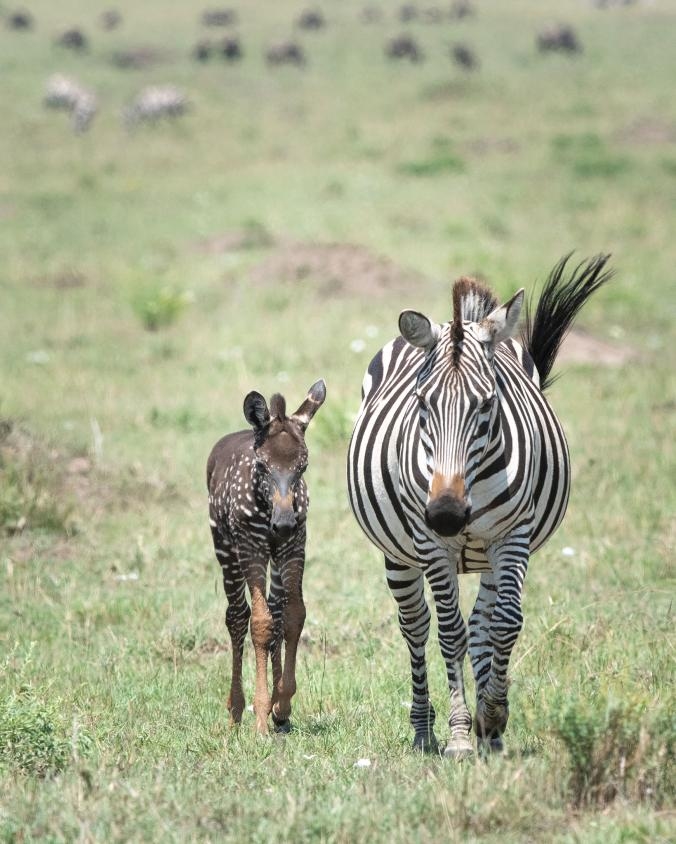 In zebras, melanocytes are uniformly distributed throughout their skin, so that a shaved zebra would be completely black. In the case of Tira and other pseudomelanistic zebras, Barsh believes the melanocytes are all there, but the melanin itself, for some reason, does not manifest correctly as stripes.

Tira’s future is likely uncertain—most zebras with such unusual coloration probably don’t survive long, Larison notes. “Research on other species has shown that, while it is harder for a predator to target an individual in a group, it is easier if an individual is different,” she says. (Read about a rare white giraffe and other unusually pale animals.)

“I have seen several photos of foals with this specific pattern over the years, but only one photo—from the ‘50s—in which the individual was either a juvenile or adult.”
Hurdles to survival
Unfortunately for Tira, recent research by Larison and others has suggested that zebra stripes evolved to deter against biting flies—one of five theories that have been posed over the years, along with camouflage and temperature regulation. Experiments in the field, for instance, have shown that biting flies don't like landing on striped surfaces.
If that’s the case, Tira won’t be as successful at repelling these flies—which can carry diseases like equine influenza—as a normally striped zebra, notes Tim Caro, a biologist at the University of California, Davis. (See a photograph of a rare black leopard photographed in Africa.)
However, if Tira can survive these many hurdles and make it to adulthood, there’s no reason to think he can’t fit into the herd.
Research conducted in South Africa has found that in two cases of plains zebras with aberrant colo
تعديل المقال
الأقسام منوعات Animal